Our Veterinary Technicians and Assistants 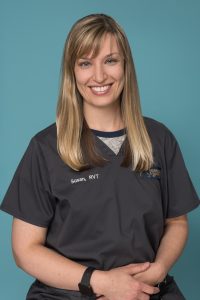 Originally from Pasadena, Maryland, and now a resident of the northern part of the state, Susan graduated from the University of Montana with a degree in wildlife biology. After she moved back to her home state, Susan worked for a general veterinary practice, a surgery referral center and an orthopedic practice before joining VNIOC.

Susan is responsible for managing the team that cares for our patients in the ICU and welcomes patients into our practice as new consultations.

Susan and her husband Jeff have a young son, Avery. They share their home with their cat, Molly. 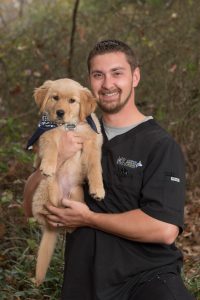 Jake was born and grew up in Easton, Maryland, and graduated from Easton High in 2009. He received an AA in applied sciences from Chesapeake College two years later.

Jake started working in the veterinary field as a kennel attendant when he was just 17 years old, then worked his way up to veterinary technician. He worked for a primary care vet on the shore for nine years before starting with VNIOC in February 2017. Jake is responsible for our practice’s surgery department and oversees patient care, surgical inventory and OR operations.

Jake and his wife, Melissa, have a daughter named Adeline, three cats, Suggs, Lewis and Torrey who are all 5 years old, and two Golden Retrievers named Benelli and Wesson. In his spare time, Jake enjoys outdoor activities such as hiking, bike riding and camping. 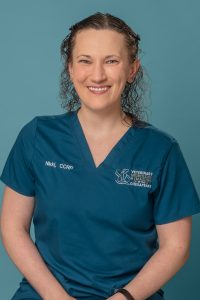 Born and raised in Annapolis, where she continues to make her home, Nikki graduated from Bowie State University with her Bachelor’s Degree in Biology in 2005. She got into veterinary medicine when the owner of a dog she walked suggested she would be good as a veterinary technician because of how well she worked with animals.

Nikki works with patients on regaining their range of motion and strength. Just as humans go through rehabilitation, so can dogs—and it can have a big impact, especially with large breed dogs. The animals can have a quicker recovery post-surgery with a better quality of life, often with less medication.

In her spare time Nikki loves spending time with her two nieces and nephew, working out with a variety of fitness programs, getting involved in races, and exploring all things Harry Potter. 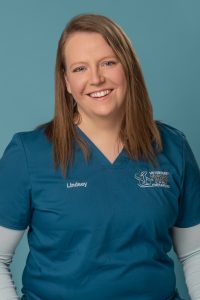 A biology major at Johns Hopkins, Lindsey wasn’t sure that she wanted to go into the field after college. Several friends and family members suggested that she look into going to veterinary school since she loves animals (especially cats) so much—but it wasn’t a suggestion she took seriously at the time.

Then one of her cats became ill and Lindsey took her into her rDVM, where that cat was hospitalized. She blurt out to the receptionist taking her deposit, “Do you ever hire technicians that don’t have any experience?” The receptionist gave Lindsey an application, but she sat on it for nearly four months before applying.

“They hired me and the rest is history,” says Lindsey. “I have been lucky to work at clinics where I am a valued part of the treatment team and can use my biology and medical background, so I haven’t really felt the need to continue on to vet school—and incur the debt that comes with it! I also really love the nursing aspect of being a technician, whether it is coaxing a patient to eat or doing something to alleviate their discomfort. If I became a vet, I don’t think I would get to spend as much one-on-one time with patients and I would miss it a lot. I’m still interested in learning all I can, and I go to CE conferences and classes whenever I can, especially when there are behavior-related courses.”

Whenever she can, Lindsey volunteers with TNR programs (Trap-Neuter-Return), in which feral cats are humanely trapped, transported to a veterinary clinic where they are spayed or neutered, then returned to their outdoor home. In her spare time, she has also helped spay deer in Northern Baltimore County.

Lindsey, who has cats and ferrets, loves teaching her family and friends “fear-free” methods for nail trims, ear cleanings, and behavior modification; and she enjoys exploring the Annapolis area. 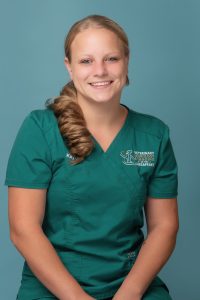 Kaytlyn joined VNIoC in December of 2017.  She graduated from Towson University in May of 2015 with a Bachelor’s Degree in Animal Ecology and Animal Biology.  She has completed two internships:  The Franklin Park Zoo in Boston, MA, where she studied Animal Management, and Second Chance Wildlife Center in Gaithersburg, MD, where she studied Wildlife Rehabilitation.

Kaytlyn is a proud mother to her son, Jackson, her eight-year-old Jack Russell/ Chihuahua mix, Todd, and her three-year-old Red- Eared Slider named Jasmine.  She enjoys spending time with Jackson, hiking, and contributing to environment conservation efforts with many charities. 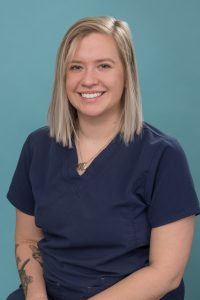 Mandy’s veterinary career started when she was 18 and was a hired at a preventative care hospital, where she worked for 5 years. She continued to expand her career by volunteering in South Africa to work with big cats and Thailand to work with her favorite animal, elephants! She had always wanted to work with exotic species, but when her own dog, Xena (a Greater Swiss Mountain Dog) became an epileptic, her curiosity about the neurology field began.

Mandy has three dogs, Gnocchi, Xena and Adaline, a cat named Sylvester, and a squirrel that she rescued named Cashew. 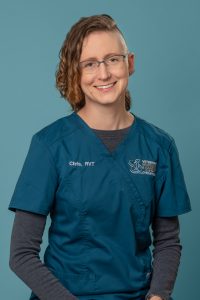 Chris, a transplant from Brooklyn, NY, moved to Annapolis in August 2020 to be close to family. She graduated from New York University in 2000 with a B.A. in English, but after spending 8 years in publishing, she decided to turn her love of animals into a full-time career. She has worked at primary care veterinary hospitals and the ASPCA in NYC since 2008 and received an A.A.S. in Veterinary Technology from San Juan College in 2016. She joined the team at VNIoC in October 2020.

Chris believes strongly in the power of the human-animal bond. She prides herself on providing focused care and heaps of affection to her patients. She also enjoys educating clients on how to care for their special-needs pets.

Chris shares her home with her husband Fred and their  two cats, Snows and Mabel.  She is a loving aunt to the ever-growing menagerie of pets of her three sisters (which has included multiple cats and dogs, a rabbit, and a bird). In her spare time, she enjoys baking, eating, reading, sailing, and talking to all the animals who cross her path. 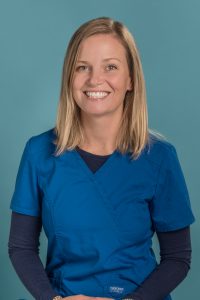 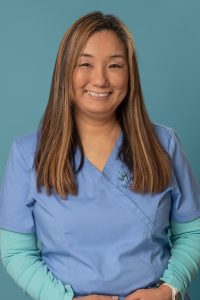 Sass attended the veterinary assistant program at Anne Arundel Community College after her beloved Rottweiler, Damien, passed away. With 9 years of experience in general practice, Sass decided she wanted to enter the specialty field and chose veterinary neurology.

Sass has sponsored a wolf named Levi at the Wolf Sanctuary of PA for the past 2 years. The mother of triplet sons and a daughter, she also shares her home with a 15 year old Poodle named Yuki and a 5 year old Yorki-poo named Sunny. 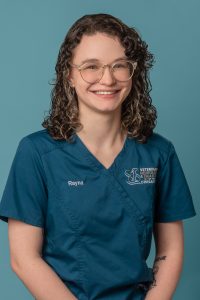 Rayna began her career in the veterinary field a few years ago following previous experience in behavioral training and grooming. While working at a primary care veterinary hospital, Rayne witnessed a patient having a grand mal seizure. This incident piqued her interest in the veterinary neurology field and led her to VNIOC.

Rayna and her husband Jacob have 2 dogs, Star and Odin, 2 cats, Neve and Bambi, and a ball python named Reggie. 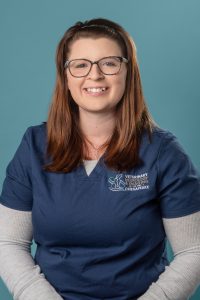 A native of Virginia Beach, Virginia, and now a resident of Baltimore County, Rhiannon began her journey in veterinary medicine six years ago in Harford Community College’s veterinary assistant program. Since completing the program, she has worked in private veterinary practices, where she has developed an interest in surgery and laboratory work. Rhiannon is continuing her education through the Penn Foster online veterinary technician program.

When Rhiannon isn’t working for VNIoC’s Towson team, she enjoys cooking at home with her husband and reading books while snuggling her 2 cats Pxe and Best friend or her dog Daisy. 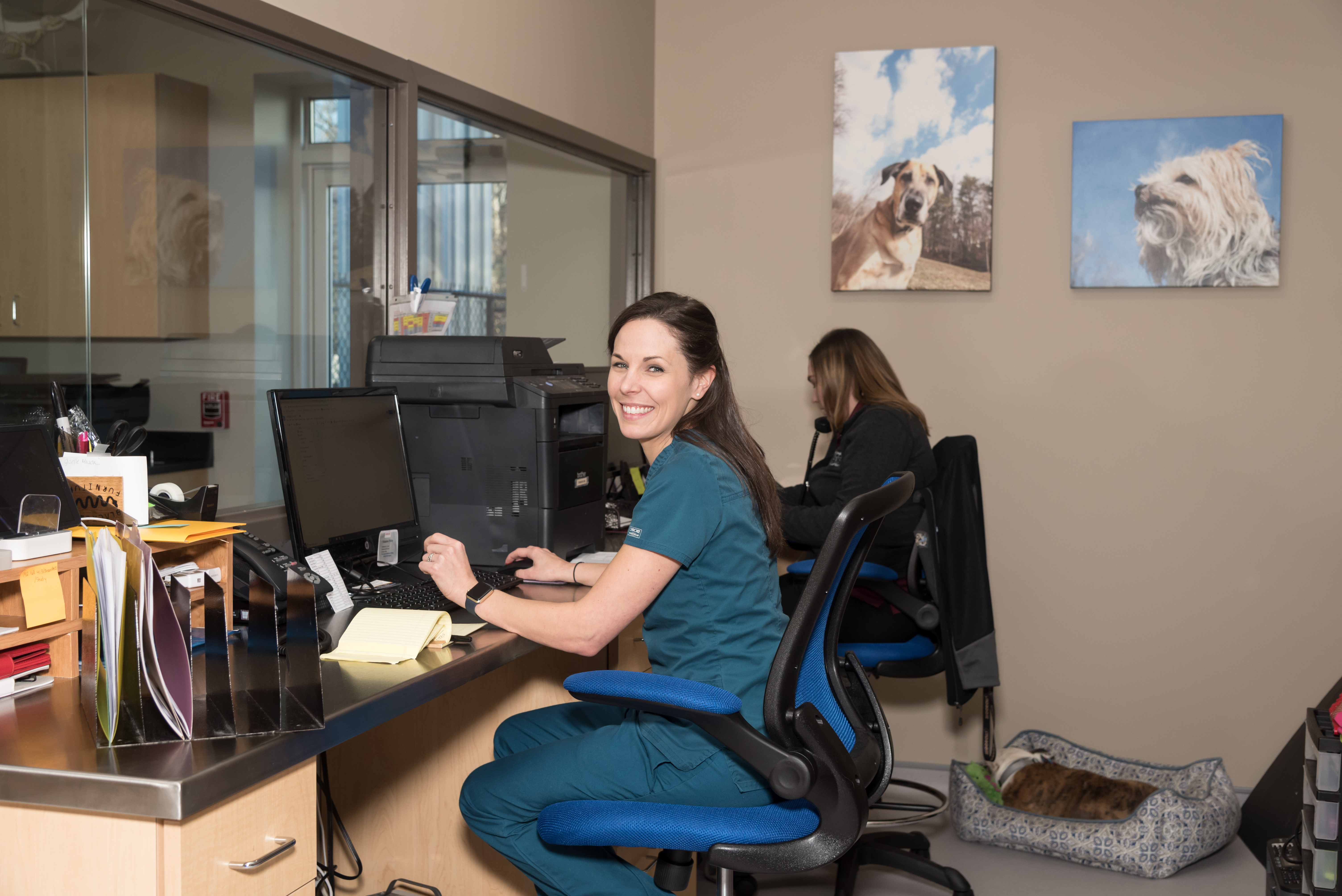 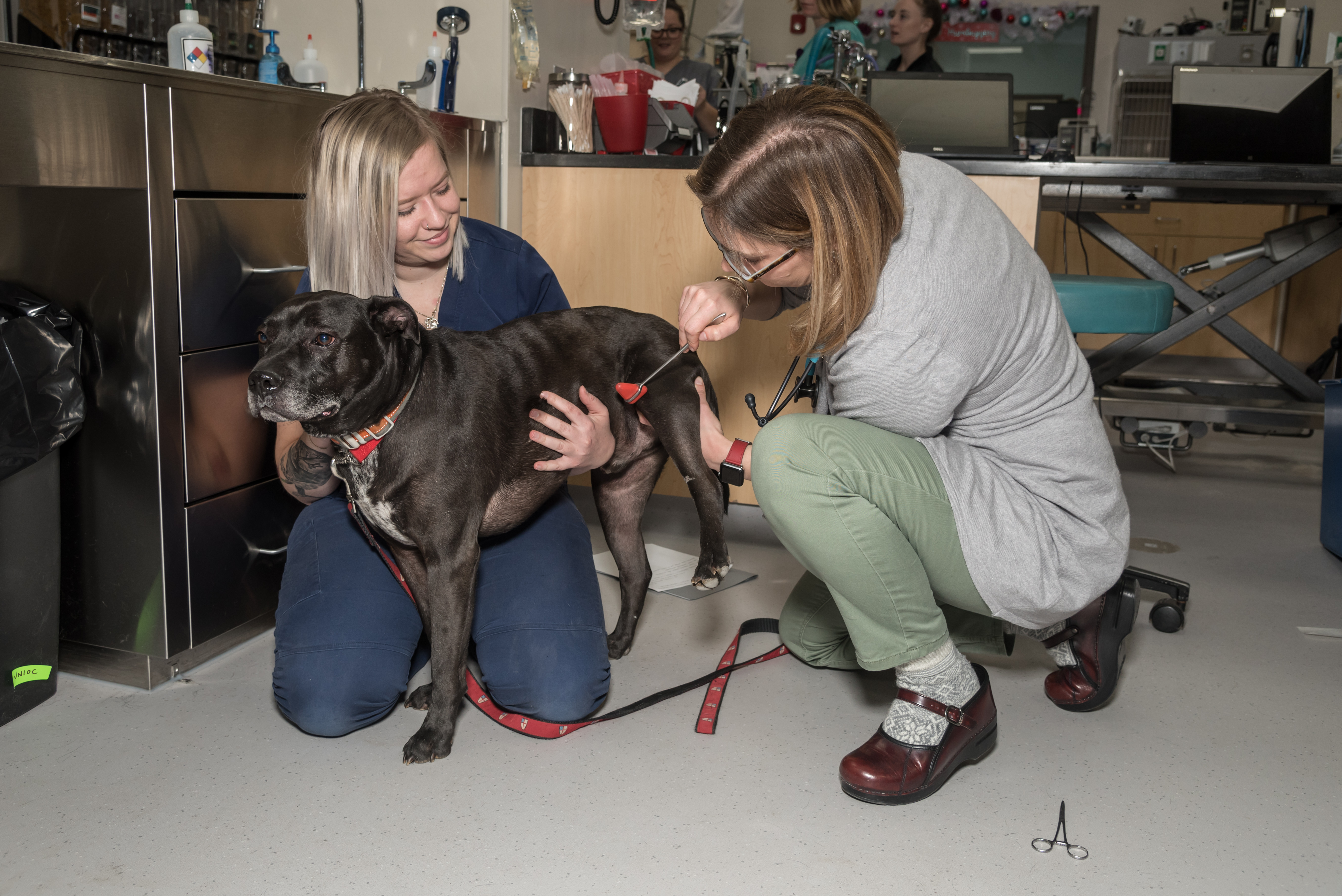 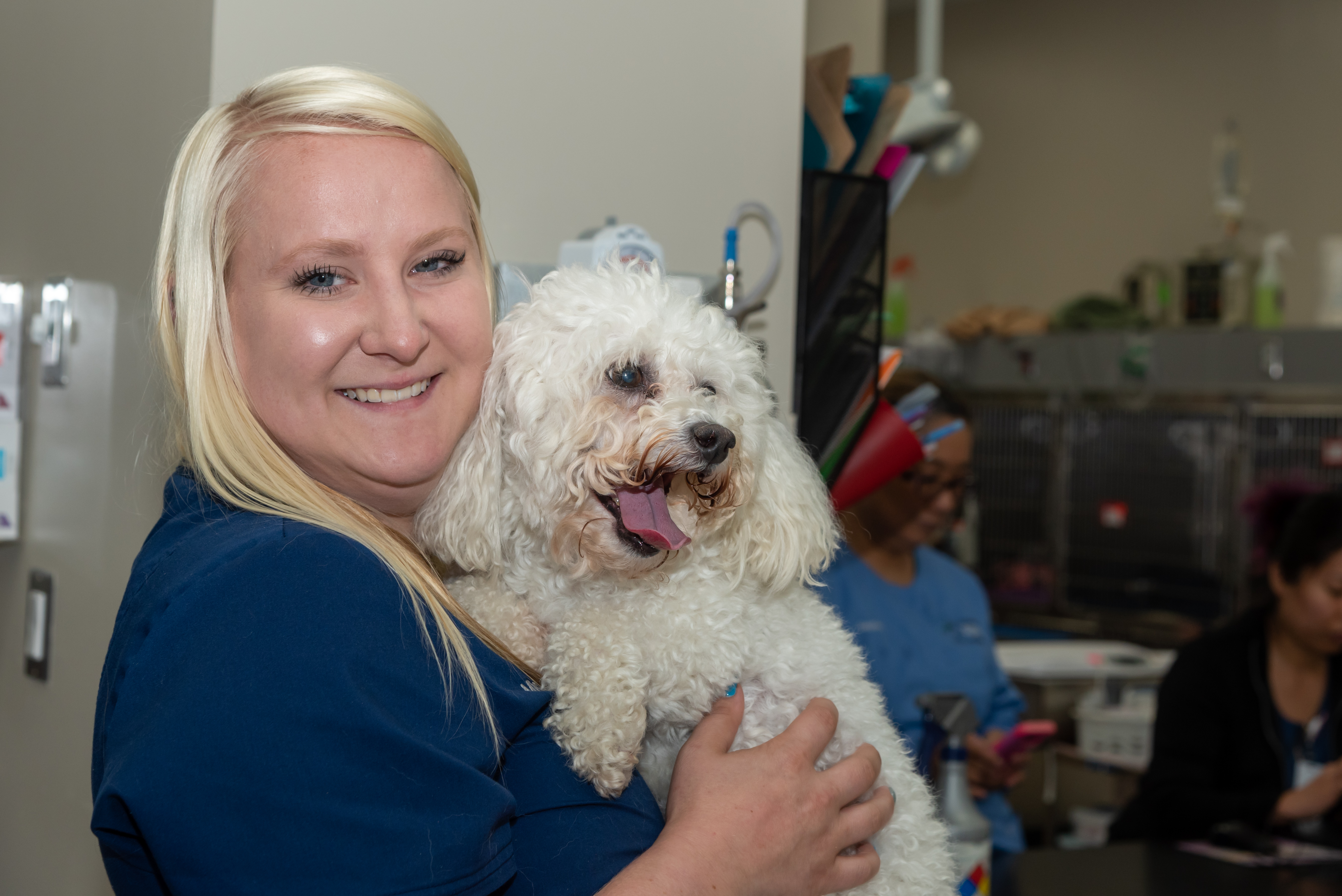