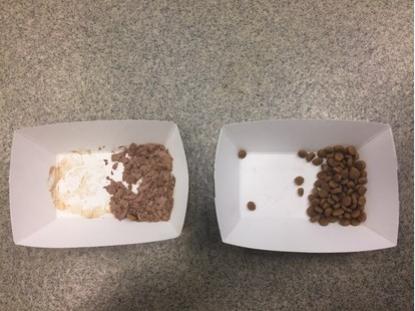 This is a picture of a cat’s food dishes after it had eaten.

We suspect this is an example of “hemi-neglect” in a cat.

Hemi-neglect, hemi-inattention or hemi-spatial neglect is a neuropsychological condition in people where they do not have awareness to the opposite visual field after damage to one hemisphere of the brain. For instance, if a person sustains damage to the left cerebral hemisphere, they are unable to process and perceive stimuli on one side of the body or environment.

Sydney, a 13-year-old FS DMH cat, had brain surgery the day before the photo of her food was shot. She had a large meningioma involving her right cerebral hemisphere removed (see below).

Hemi-inattention is not well defined in veterinary patients but in this situation, we assume the phenomenon resulted in Sydney failing to identify the food in her left visual field.

We solved this problem for Sydney by spinning her food bowl 180 degrees—and she happily ate the food right up.  At her two-week recheck, Sydney did not show any further evidence of hemi-inattention. She ate EVERYTHING in her bowl!

These magnetic resonance images are from a brain study performed on Sydney. Based on the MRI, which included T2W, pre-contrast T1W, FLAIR and post-contrast T1W sequences, we were very suspicious of a meningioma.

Meningiomas are the most common brain tumors in cats with a very positive prognosis if operable. We judged Sydney’s tumor, as well as her condition, to be amendable to surgery. After we stabilized her for one week with anticonvulsants and low dose steroids, she was taken to surgery. A right-sided rostrotentorial craniectomy was performed to remove the tumor in toto. She recovered in the ICU over the course of two days and was discharged three days after surgery.

I believe that removing the tumor and brain manipulation of the brain caused the temporary hemi-inattention. After surgery, the hemi-inattention resolved once the brain re-established its blood supply and the post-operative edema diminished.

This is an axial post contrast T1W image of Sydney’s brain at the level of her midbrain-middle ears that shows a large contrast-enhancing mass in her right cerebral hemisphere.

This is a parasagittal post contrast T1W image of Sydney’s brain that shows a large contrast-enhancing mass (identified as meningioma) in her right cerebral hemisphere.

The prognosis for cats with meningiomas is quite good. More than 50% of cats treated with surgery for cerebral meningioma survive past 24 months. Sydney’s one and four month rechecks were normal.