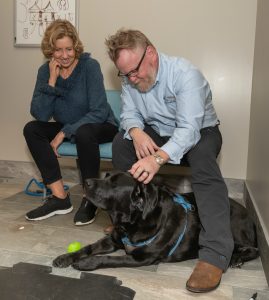 Six-year-old Max is “a big, beautiful, goofy black Lab,” who’s clearly adored by his two humans, Ingrid Bergstrom. and her neurologist husband, Dr. Craig Bogen. Athletic like most Labs, Max is also injury-prone. A year ago he suffered a neck injury so when Max fell down the steps recently, the local ER veterinarian near their home in Delaware recommended going to VNIoC for a full work-up, which would include an MRI.

When Dr. Bogen took Max in for the consultation, Dr. Archambault immediately noticed gait and reflex abnormalities, which led him to suspect a spinal cord problem. The MRI showed disc-associate Wobbler syndrome (DAWS) involving his C5-6 disk space, which caused compression and gliosis of the spinal cord. Dr. Archambault consulted with Dr. McDonnell on the case and a plan was proposed to perform cervical disk replacement using a titanium artificial disc developed by Dr. Filippo Adamo in California. This surgery shows excellent results with rapid recovery and return to activity. Replacement is superior to other surgical procedure such as a ventral slot or stabilization. More information regarding this surgery is at wobblersyndrome.com/adamo-spinal-disc/ which includes a short clip of the surgical procedure.

“We can immobilize people with halos or other devices so they can heal after neck surgery. With dogs, it’s hard to keep them still, so the type of surgery and follow-up we do with humans won’t work,” explains Dr. Bogen.

Surgery involves removing the diseased disk under distraction and placing the artificial disk. The distraction is released and the disk is retained at the disk space. The disk is made from titanium for strength and decreased magnetic artifact (MRI). Two pieces articulate by a ball and socket mechanism and allow 30 degree movement. Dr. McDonnell was the first veterinary neurosurgeon in the mid-Atlantic area to perform this type of procedure, which he helped develop.

“Given Max is young and very active, he likely would re-injure his neck,” continues Dr. Bogen. “We decided we needed to operate as it seemed the best option for him long-term.”

Dr. McDonnell reports, “Most dogs return to full normal function. In fact, one of our patients was an agility dog that was able to return to competition 2 months after surgery.” 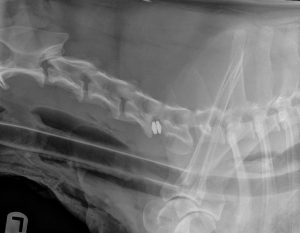