Brain tumors are unfortunately as common in dogs and cats as they are in people. They’re relatively common in older dogs, but as we’ve seen with many of our patients including Remi and Danny, there are multiple treatment options that can be used successfully. 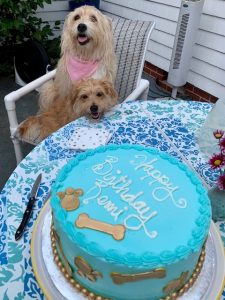 On August 8th, 2019 Remi celebrated her ninth birthday, along with her best friend, Lyla–a celebration her owner, Samantha Storey, didn’t expect her to make a few months ago. (That’s Remi at left, rocking her pink bandana.)

Dr. Storey, a small animal emergency veterinarian in Salisbury, Maryland, says Remi had a seizure at the end of February. “It only lasted a minute and she recovered quickly, so I decided to wait and see – but when she had another two weeks later, I called VNIoC’s Townson office to schedule a visit.”

At the first visit, everything appeared to be normal, but after an MRI and spinal tap a week later, Storey says, “Dr. McDonnell asked me to come to Towson to speak in person – that’s when I knew it was something serious. He explained there was a suspicious brain tumor (it later turned out to be a low-grade glioma). He talked over the options with me, including the clinical trials that were available, and really eased my concerns.”

With time of the essence, Dr. McDonnell contacted several universities about trials. Together he and Dr. Storey chose one at the University of Minnesota as it is well-established and has had good results. But then, mid-March, before treatment could begin, all the universities and their clinical trials shut down due to COVID-19.

“Dr. McDonnell kept contacting the universities to get other options,”Dr. Storey explains. “When he spoke with the researchers at the University of Minnesota, they agreed to let him do the surgery and the post-operative care, which has included giving her a vaccine made from her own tumor cells. He called me right after her surgery – she had already been out for a walk and was doing fine! She came home the next day.”

Since her surgery, Remi has had no seizures and her first post-surgery MRI showed no signs of the glioma coming back. According to Dr. Storey, “Remi’s the same big, scruffy mutt she always was, but more playful and active than before.”

The experience has had an impact on Dr. Storey’s practice, as well. “When I managed seizures, I was less likely to recommend brain surgery, since it sounds so scary and daunting. Now I have a completely different conversation about the options.” 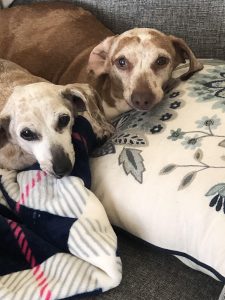 On August 10, Danny (he’s the one on the right, shown with his mom) marked the two-year anniversary of his diagnosis of a cancerous brain tumor. That day, his owner, Jenn, wrote Dr. Harvey, “If it weren’t for you and your team taking care of him, who knows where we’d be right now. I’m so appreciative of all the additional time I’ve had with him.”

Jenn adopted Danny and his mom in 2014. The two were rescues and had had a rough life. “Danny was recently diagnosed with a heart murmur and asthma. When he started having seizures in August 2018, he was rushed to AAVEC and had an MRI done.  Dr. Harvey, found he had a brain tumor in the frontal lobe. She felt that they wouldn’t get clean margins, due to where the tumor was located, if they operated, so I chose palliative care.”

Jenn ensures Danny sees his neurologist every three to six months. She stays very in-tune with Danny, she says, “I watch his behavior closely and if I see any changes, I call or go to the vet – it may mean a change in his anti-seizure or other meds. Weekly acupuncture has helped and I do Healing Touch for Animals on him. I try to keep him stress-free and feed him the best diet.”

Since moving to Missouri to be with family, Jenn has kept in touch with Dr. Harvey and Dr. McDonnell. “They’re amazing. I’ve told my local vets to call VNIoC if they ever have a question about his treatment. My local vets are so surprised Danny is still living and doing so well!”