A TAIL OF TWO SPINAL FRACTURES

Gus is a one-year-old Bloodhound that came into Anne Arundel Veterinary Emergency Clinic at CVRC Annapolis for difficulty walking. Intent on a great adventure, he and his (much smaller) Boston Terrier friend escaped their yard by squeezing under the fence. Immediately after going under the fence, Gus was found to be weaker in his rear limbs, and was paraplegic upon presentation to AAVEC. Gus was examined by Dr. Laura Harvey and found to have a lesion within the thoracolumbar region of his back.

An x-ray was performed of this region of his back, which showed a compression vertebral fracture of L2. He was hospitalized overnight and started on strong pain medications and nursing care for his injury. The following day, an MRI was performed which revealed injury to the spinal cord secondary to the instability from his spinal fracture. 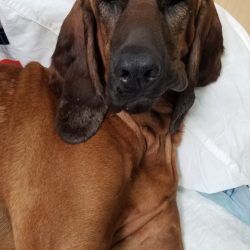 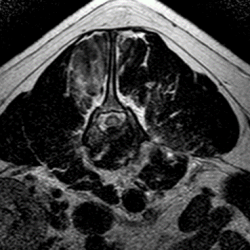 MRI image showing inflammation and injury to the spinal cord 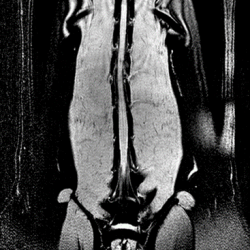 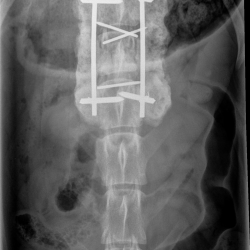 Gus remained in the hospital for an additional five days, during which time he started regaining a mild amount of voluntary rear limb movement and voluntary urination. Gus was discharged with rest instructions, but developed a complication from the procedure called a seroma, which is a pocket under the skin at a surgical incision that is typically filled with fluid. A surgical drain was placed at his first recheck visit.Dr. Nick Archambault, with the assistance of Dr. Harvey and Dr. Mindy Wolff, a surgical resident with Chesapeake Veterinary Surgical Specialists, performed surgery to stabilize his spinal fracture with a fusion performed from L1-L3 vertebral bodies. Gus was given a fair prognosis for recovery of function.

By his second recheck, only one month from the procedure, Gus was walking well without support! Click here to watch an amazing video of his recovery, one month after surgery. He was comfortable and his x-rays showed bony healing of his spinal fracture. Gus is back to his normal self today, and hopefully has learned not to crawl under any more fences!

Phoebe is a two-year old Yorkshire Terrier mix that presented to AAVEC for inability to walk after being hit by a car the day before. She had also escaped from the yard and ran into the path of an oncoming car. She was taken for overnight care at a local emergency clinic and transferred to AAVEC, and then to our neurology service, for further care. Although she was able to move her limbs, Phoebe lacked the strength to walk. X-rays performed of her lumbar vertebral column showed a luxation of L4-5 vertebral bodies. A CT (computed tomography) scan was performed of her back which showed severe torsion/rotation at the luxation site with a L5 body fracture.

Dr. Archambault took Phoebe to surgery after the CT, where a spinal fusion/stabilization was performed from L3-L6. Phoebe also had a large wound to her side, which was repaired with help from CVSS during her hospitalization.

Phoebe returned two weeks later for her first recheck, and was walking well without support. The x-rays performed during her second recheck visit showed healing/union of the fracture site and therefore she has been cleared to resume normal activity. 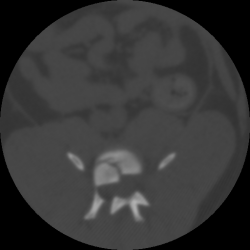 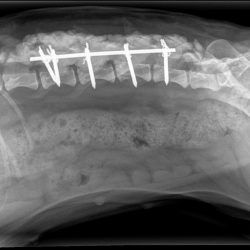 If your pet is showing signs of a neurological disorder, including seizures, paralysis or abnormal behavior, call us to find out how we can help.

VETERINARY NEUROLOGY & IMAGING OF THE CHESAPEAKE