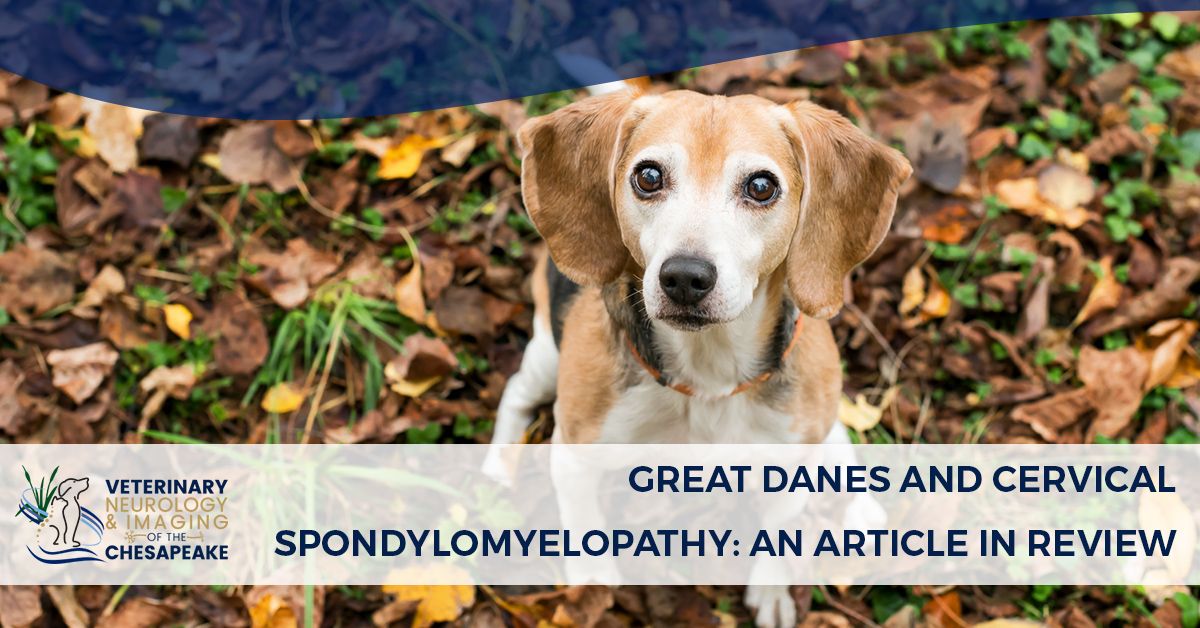 GREAT DANES AND CERVICAL SPONDYLOMYELOPATHY: AN ARTICLE IN REVIEW

Given the highly sensitive nature of MRI in evaluating the spinal cord and vertebral canal stenosis, potential for over-interpretation of the study can occur. For this reason, it is important to understand the frequency and variation of “normal” that can be seen on a clinically asymptomatic patient. Few veterinary studies have been conducted on MRI findings of clinically normal dogs.

Great Danes often have osseous-associated cervical spondylomyelopathy (CSM), which is different than the disc-associated CSM. This prospective cohort study of cervical spine MRI of 15 clinically normal and 15 CSM affected Great Danes was conducted to help characterize the morphological features between these groups.

Thirty client-owned Great Danes were enrolled in this study at The Ohio State University between April 4, 2011 and October 4, 2012. Criteria for the 15 normal dogs included age of less than a year old, no history of neurologic disease, and a normal physical and neurological exam. Exam findings, age of onset of clinical signs, and any medication given were recorded for the 15 dogs enrolled with exam findings consistent with CSM. MRI (3.0T) of the cervical spine (C2-T2) was performed on all of the dogs. Images were evaluated by one unblinded evaluator. Each dog was evaluated for compression of the subarachonoid space, spinal cord, or both. Spinal cord compression was graded based on percentage reduction of cord diameter; and the cause of the compression was classified as intervertebral disc associated, osseous associated, or soft tissue hypertrophy.

For the 30 Great Danes evaluated, there was a total of 210 intervertebral spaces and 420 foraminal sites reviewed.

Findings reported for the Great Danes affected with CSM were similar to previously reported MRI findings (osseous changes of articular process joints, lamina, or pedicles, and compression of subarachnoid space or spinal cord).

One clinically normal dog where spinal cord compression was found can be analogous to asymptomatic cord compression in humans, which is not uncommon. In people where this is found, degeneration and development of symptoms can develop over time. Therefore, it is likely that this dog will develop CSM signs as it ages. Further longitudinal studies would need to be done to confirm this theory.

This study demonstrates that cervical vertebral column abnormalities can be present in even clinically normal Great Danes and demonstrates the importance of coupling MRI findings with a thorough neurologic exam before implementing treatment.