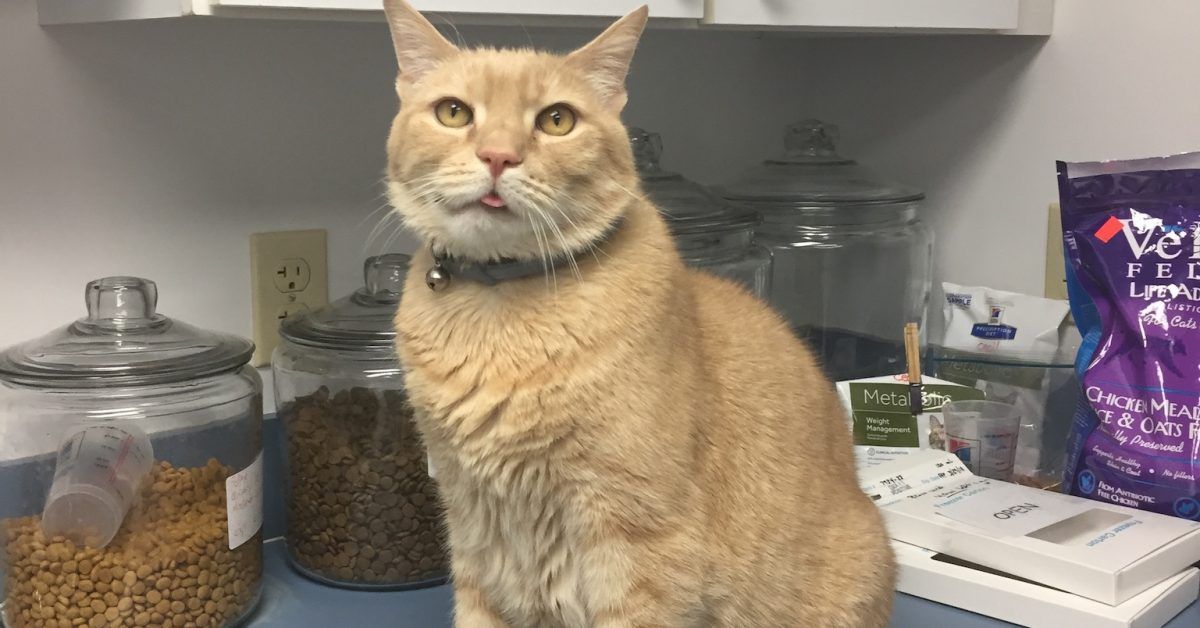 SIMBA WAS HIT BY A DUMP TRUCK…

If you’ve ever been to Healing Hands Animal Hospital on the Eastern Shore, you’ve likely met Simba the cat, who’s been the “practice pet” for the past 11 years. His family signed him over to Dr. Carol Ross Lewis after Simba was hit by dump truck and sustained serious injuries. While Simba healed well, he was left with a crooked jaw and a tongue that often stuck out.

As Stephanie Bystrak, the practice’s Reception Manager explains, Simba soon found his “job” at the practice. “Simba became our mascot. He’d hang out at the front desk and greet people and their pets. At Christmas, we’d put him in a Santa suit. He has quite the personality and doesn’t mind being dressed up in the least!”

In 2015, the staff noticed that Simba seemed wobbly. His tongue was protruding more, and he couldn’t jump up to his usual perches in the lab. “Dr. Lewis examined him and became very concerned that something neurological was going on, so we took him to Dr. McDonnell.”

An MRI revealed a meningioma, so Dr. McDonnell performed a craniectomy on the then 11-year-old cat.

That was 28 months ago, and when Simba came back for his follow-up in early February 2018, Dr. McDonnell was delighted to find he is doing great. While Simba spends more time in Healing Hands’ lab these days—“He’s very food-motivated,” says Stephanie, “and that’s where we keep the food”– he’s back to his former self.

While people are often hesitant to bring their cats in for neurosurgery, this goes to show how an older cat can benefit from—and thrive after—major surgery.