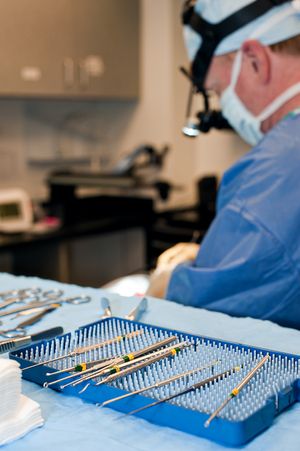 How We Help Pet Owners at The Wobblers Surgical Institute

here is where we need the information from JAY

Here at LIVS, we want pet owners to be informed and feel confident when deciding on the type of care for their beloved pet. That is why the Canine Chiari Institute at LIVS is dedicated to educating dog owners about Chiari-like Malformation including the signs, symptoms, and treatment options.

What is Chiari-like Malformation and Syringomyelia?

Chiari-like Malformation (CLM), formerly known as Caudal Occipital Malformation Syndrome (COMS), is a condition in dogs in which the rearmost part of the brain, the cerebellum, descends out of the skull through the opening at its base, called the foramen magnum, crowding the spinal cord.

Chiari-like Malformation and Syringomyelia (the presence of one or more syrinxes) have high heritability and considered a developmental abnormality resulting in various clinical signs in affected patients and is commonly confused with many other conditions. It affects predominately small and toy breed dogs, in particular the Cavalier King Charles Spaniels (CKCS) and the Griffon Bruxellois.

The hallmarks of this disorder are pain and abnormal sensations like itchiness. We can usually tell if a dog is in pain with CLM/SM. An affected dog will often cry out and adopt a “nose down” position when its neck is hurting. Although neck pain is widespread with this disorder, we have also seen many dogs who exhibited back pain as well. Dogs with CLM/SM often appear to have increased sensitivity to being touched.

Some dogs with CLM will display an abnormal curvature of the spine, called scoliosis.

The causes of CLM are not yet fully understood. One theory is that the miniaturization process in some toy breed dogs went awry, and the brain did not decrease in size in proportion to the skull, and/or the skull is not big enough for the brain. The disorder was originally identified in the Cavalier King Charles Spaniel, but it has since been recognized in many different breeds of dogs –– in particular, the Brussels Griffon, among other toy breeds.

Studies have suggested that the Caviler King Charles Spaniel appears to have a brain more appropriate for a bigger dog.

Based on your dog’s symptoms and a physical exam, your primary care veterinarian might suspect CLM and refer you to a board-certified veterinary neurologist for an MRI of the skull and neck for a definitive diagnosis.

The entire central nervous system is imaged when patients are evaluated as part of the CLM screening programing at The Canine Chiari Institute at LIVS. Additionally, we are equipped with one of the only 3.0 Tesla MRIs in the world dedicated to veterinary imaging and recognize the benefits of better resolution, faster imaging requiring less anesthesia time, and can perform CSF flow studies with each patient.

CLM is a serious condition and treatment is dependent on the severity, age, and overall health of the animal.

Dogs with mild changes should still be considered surgical candidates to minimize the progression of the disease as the dog ages. Severe cases of CLM/SM, regardless of age, are still surgical candidates as a lot of dogs do have some relief of clinical signs as they heal. Many dogs may still require management post-operatively with medication, but the variety and dosages may be reduced with surgical correction. Dogs that have been managed with medication initially and continue to have disease progression may still benefit from surgical intervention.

One of the most common and devastating aspects of CLM/SM in dogs is pain. In addition, the scratching activity characteristic of the disorder is suspected to be a sensory disturbance called paranesthesia. Most dogs with CLM/SM with clinical signs of disease exhibit varying degrees of neck pain.

It has become apparent that many patients, however, have pain throughout the length of their spine. When these dogs have MR imaging of their thoracic and lumbar spines performed, in addition to their neck region, syrinx cavities are usually found in all of the imaged locations.

There are a number of medical therapies that seem to help CLM/SM dogs with both pain management and scratching activity. Still, there are no controlled clinical trials published yet to measure the efficacy/inefficacy of these treatments objectively. Therefore, there are a lot of opinions regarding which drugs or drug combinations are helpful in this disorder. The three main categories of medical therapy for CLM/MS include:

If you suspect CLM/SM in your pet or have been referred by your primary care veterinarian, please contact LIVS neurology department.

If you are traveling from outside the area for your pet’s consultation, please enter your information in the form below to help facilitate your visit. By emailing in advance, we can arrange for your appointment times and review your patient records, ensure the necessary test results have been forwarded to us, and recommend local hotels and other details to make your consultation as productive as possible.