Metronidazole is a synthetic nitroimidazole compound used in small animal practice for the treatment of inflammatory bowel disease, gastritis associated with helicobacter, giardiasis and empirical treatment of diarrhea. Metronidazole is also used to alter intestinal flora in dogs with hepatic encephalopathy and exocrine pancreatic insufficiency. 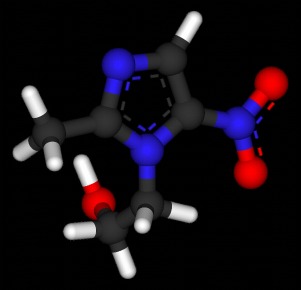 Use of this antibacterial has been advocated in the treatment of osteomyelitis and periodontal diseases. Although how the drug works is a matter of controversy, it is believed that metronidazole disrupts DNA and nucleic acid synthesis in bacteria. Its antiprotozoal activity has not been completely described.

Metronidazole pharmacokinetics and basic pharmacology is covered quite adequately in drug formularies such as Plumb’s Veterinary Drugs or BSAVA Small Animal Formulary.

Of course, as with all medications, metronidazole can have serious side-effects. Some adverse effects in dogs and cats include:

Neurotoxicity following prolonged therapy is most often related to cumulative dose and duration of treatment. Most dogs that develop neurologic signs secondary to metronidazole administration have received weeks to months of therapy, but I have seen possible toxicity after short-term therapy at relatively low dosages (<60 mg/kg/day). In general, higher dosages may produce signs in a shorter time period than moderate to low dosages. Reversible CNS dysfunction may produce signs including ataxia, recumbency, opisthotonus, positional nystagmus, muscle spasms and occasionally seizures.

The mechanisms of metronidazole neurotoxicity are unknown, but proposed mechanisms include inhibition of neuronal protein synthesis by binding to RNA and thiamine antagonism.

Most dogs affected with metronidazole neurotoxicity recover within one to two weeks of drug withdrawal. In a study in the Journal of Veterinary Internal Medicine [17:304-310], Evans et al suggest that dogs treated with diazepam had a more rapid resolution of clinical signs than dogs treated with supportive therapy alone. In this study, the authors evaluated potential differences in the recovery time between dogs with metronidazole toxicosis treated with diazepam and a similar group that did not receive diazepam as part of the therapy. Treated animals received 0.25-0.5 mg/kg diazepam IV followed by a similar dose PO TID for three days. The recovery time for treated versus untreated dogs was 38 hours and 11.6 days, respectively.

Results of this investigation demonstrated that diazepam appeared to facilitate and speed recovery for dogs with metronidazole toxicosis. From the similarities in the plasma half-life of metronidazole and the average response time of the diazepam-treated group, the authors speculated that once metronidazole is displaced from the benzodiazepine receptor by diazepam, normal metabolism of the displaced drug then occurs, resulting in the rapid clinical improvement observed. Furthermore, once metronidazole is displaced, the exogenous benzodiazepine not only restores, but also improves, normal benzodiazepine-induced chloride conductance, thereby enhancing an inhibitory effect on excitatory neurons.

Cats have been reported to develop CNS signs as a result of metronidazole intoxication. Typical signs include vestibular ataxia, weakness, disorientation, 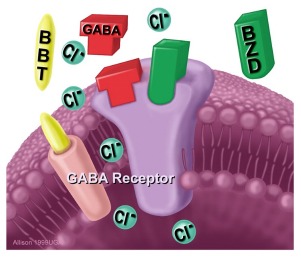 Diazepam given to cats for several days has been implicated in idiosyncratic fulminant hepatic necrosis that can be fatal. It is, therefore, questionable if diazepam should be given to cats with metronidazole toxicity. Cats often begin to improve within 48 hours after discontinuation of the metronidazole and initiation of supportive therapy.

Conclusion: Metronidazole remains a valuable aid in the therapy of many clinical conditions, as long as the clinician remains aware of potential side effects and their management.